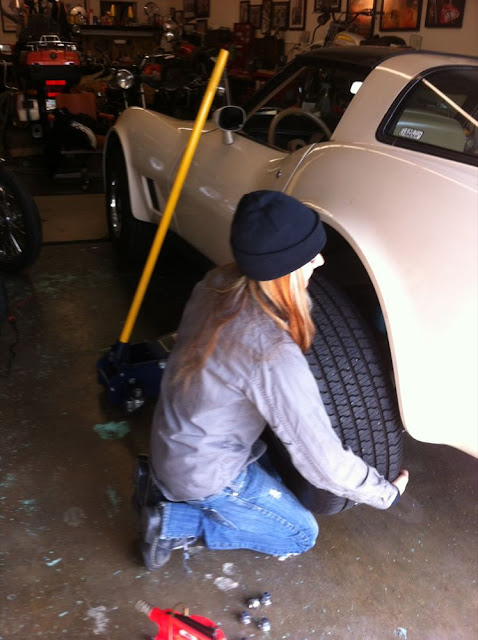 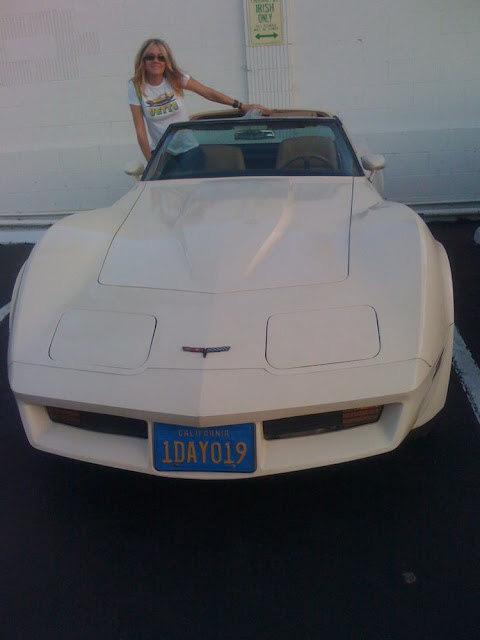 Apocalyps disappointed but Christmas is great!

After surviving the Apocalyps we drank coffee and went to Irv Seaver to pick up throttle cables for the R100S and the Orange Farmers Market to buy food. We saw this nice Vette on the way to Irv Seaver.

It’s raining outside and the Benz looks like crap.
The noise from the radio's Jingle Bells Rap.

You beat up some kook in an S.O.A. tee,
...drive home from the park with a freshly chopped tree.

The wife’s on her iPad doing live request cam,
you head for the market to steal a fat ham.

Your phone starts to buzz as you head out the door.
The In-laws again, they’re looking to score.

Christmas will be here in just one more night,
bring ’em a bottle they’ll stay out of sight.

The kids left last Friday to go out and play,
they always come home for the big holiday.

You pass by a church and think about mass,
but you know ol' Santa don’t give a rat’s ass.

Arrive at a mall where the parking lot’s packed,
the really good cars have already been jacked.

The soon bankrupt Center’s a mile away.
You snag a good space it might be your day.

In front of the Wet Seal you hear a loud sound.
The cops have your daughter hog-tied on the ground.

You duck into Nordstrom before you are seen,
They won’t keep her long she’s only fourteen.

Searching and searching you snag the right gift.
The guard’s been on Facebook most of his shift.

Slip out the back door and into the cold.
Shoplifting's easy when you start to look old.

Your friends and your family can’t wreck your yuletide.
To hell with them all just go for a ride!

Buell, Crocker, Indian, and a couple other American Legends

We got an interesting glimpse at the past, present, and future of motorcycling with the help of a a few old names showing a lot of promise at the Long Beach International Motorcycle Show.

Indian showed up with what they say are the last Stelicon/Gilroy/evo inspired Indian models, a recording of their new motor, and the genuine Munro Special (better known as The World's Fastest Indian). Their recent purchase by Polaris should provide them with more cash, engineering, manufacturing, and distribution capabilities they need to be a world class player again. We're looking forward to some exciting new products from them!


After my cousin Tim posted a picture of our grandfather in a WWI Navy uniform (I never knew he was in the Navy) I got a little curious about my family. I Googled my grandfather and learned he was born in Missouri. I'm pretty happy about that because I liked riding Route 66 through Missouri last summer and everyone we met there was really nice. Wendy and John who we hung out with in Seligman, AZ are from Missouri too!


My Grandmother was born in Mississippi near Tupelo on the Natchez Trace. She was a librarian and school teacher in Forrest City, Arkansas before marrying my grandfather and moving to California in the late 30s.
Now I'm trying to find information on Robert M Law who was a motorcycle dealer in Orange County, CA. I bought an old license plate frame from his shop at a swap meet and when I mentioned it to my father several years later he said Robert was his cousin and he had bought an AJS from him in the early 60s. I know he was a Parilla dealer and I think an AJS, BSA, and later a Honda dealer in Fullerton or Anaheim.


We were on our way to the Pomona Swap meet Sunday when we decided to go go to Venice to see what's going on at Deus Ex Machina and maybe have a look at a BSA over that way. As we approached LA Lori suggested we stop by the LA Auto Show on the way. We ended up spending the whole day there sitting in cars and falling in love. Aston Martin, Buick, Cadillac, Chevrolet, Chrysler, Dodge, Ford, Jaguar, Jeep, Mercedes Benz, Mini, Morgan, Porsche, Rover, Volkswagen, and Volvo all had cool stuff for a Route 66 road trip. Go to their websites and take a look. Their pictures are better.