Sink Cruise and a little LBC

Late post alert! We went looking for a vintage bicycle a couple weeks ago and scored these treasures about five minutes in. Never did get a bicycle. 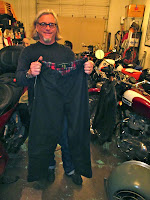 Bonus!!! Thanks Jessica at Yellow Devil Gear Exchange for the score on my wax coton Belstaff pants. I should probably wear them today with a green Steve McQueen Sweat Shirt!
Buy one now so you can look cool next St Patrick's Day too!
Free Shipping to U.S.A and discount shipping on international orders!

NOW TO OUR ROAD TRIP!

A couple months ago, we were looking around George the Second antique store in Orange (very nice stuff and they let us inside) and saw a couple sinks we liked. They were real cool and out of our price range. A couple weeks later we got a message from the woman who'd helped us there about a sink she found at Pennington's in Prescott. Anyway, between road trips, Monday meetings, and an all around glamorous lifestyle, we haven't been to Winslow since January.

So we emptied the truck and took the southern route to Prescott with a quick stop in Quartzite. Lori got to see Sweet Pie and scored a stack of old pulp-fiction books. I picked up a DVD of Sweet Pie's 2010 show. Haven't watched it yet but his CD is really cool blues with a 60's hippie edge. From Quartzite we went north east to Wickenburg for dinner at Bar 7.
They have killer Chicken Fried Steak and a bar. The steaks are good too and people seemed especially happy in Wickenburg. Unfortunately we didn't take any pictures.

After an hour or so over a winding mountain road we arrived in Prescott and were guided in to St. Michaels on Gurly St. and Whiskey Row by Richard. St Michaels is a grand old haunted hotel in the middle of all the action...and there's plenty of action. Great staff, and plenty of motorcycles too. We can't wait to ride these roads.


We made it to Winslow Sunday in time to unpack and dig around in the Motor Palace. Monday was all about getting our hands on the building permit and lots of cleaning and sorting.
Our reward was a drive to Holbrook for dinner at Joe & Aggie's Cafe. They make some of the best Red and Green Chile around. Their secret is Grandma Aggie's recipe in small batches daily, and cast iron pots.
After dinner we returned to the Motor Palace for a little more work and relaxation.